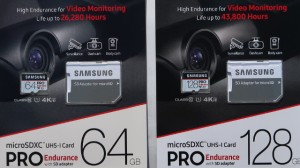 With so many microSD cards available, what features could one card offer that are superior to another? That depends upon the application.

Needing a microSD card upgrade for write-intensive purposes, I tried the Samsung PRO Endurance 64GB and 128GB microSD cards that are designed especially for continuous writing and supposedly offer better protection against the elements.

These are newer cards, so do they work with Linux?

(Nobody sponsors this. I am only sharing my results when using it with Linux in case this knowledge helps somebody else. The links to Amazon are paid links intended to help others locate the items and to help support the time spent writing this article.)

Back of the box is the same for both.

Why the PRO Endurance?

“The PRO Endurance line costs more than comparable capacities, so what is the advantage?”

The answer is the purpose. The PRO Endurance line is intended for operation in more stressful environments (higher temperatures, moisture, magnetism) than regular microSD cards. In addition (and the reason why I wanted to try these particular cards) is that they are designed for sustained writes over long periods of time.

With other cards, such as the SanDisk Ultra 64GB and Samsung EVO 64GB microSD cards, I would notice rare but intermittent write errors with some devices, such as dashcams and cameras, when subjected to extreme temperature swings and prolonged, continuous writing. In a few cases, I have had to completely reformat the microSD card (losing any data) to make the device recognize it again.

The PRO Endurance is supposed to reduce or eliminate these types of errors by being designed for nonstop writing. They are also supposed to have a longer write lifespan too.

“Will the PRO Endurance work with Linux?”

Linux is mentioned no place on the packaging, but both are 100% plug-and-play compatible with Linux (assuming Linux can read the default exFAT filesystem). However, you can format the cards to any other filesytem that you like.

How Have They Held Up?

So far, performance justifies the claims. No write problems so far. However, I have not used these cards anywhere near as long as past microSD cards, so perhaps age is also a factor. Time will tell how reliable the PRO Endurance line is with its three-year warranty.

The box claims 100MB/s reads and 30MB/s writes, so let’s test this using CrystalDiskMark in Windows 10 and Disks in Linux Mint 19.1.

For comparison, I re-benchmarked the Samsung EVO 64GB and the SanDisk Ultra 64GB microSD cards that I had been using over the past years to see what kind of speed advantages the PRO Endurance would offer over them.

All cards were connected to the computer via the motherboard USB 3.0 port using the Plugable USB 3.0 adapter.

The PRO Endurance read speeds never reached the advertised 100MB/s. Overall performance was identical between the PRO Endurance 64GB and 128GB versions, so capacity did not affect transfer rates.

PRO Endurance performance was on par with the older SanDisk Ultra, but much improved over the Samsung EVO.

AHA! Disks reveals the true benefit of the PRO Endurance.

Disks in Linux Mint 19.1 revealed better transfer rates than CrystalDiskMark in Windows. Reads were in the 90+ MB/s range and writes were in the 34+ MB/s range. Both PRO Endurance cards offered better numbers in Linux over the SanDisk Ultra and were a definite improvement over the Samsung EVO.

But look at the red line in the graph. THIS is what is most important. With sustained writing (simulated by the 100x100MB benchmark), both PRO Endurance cards showed a practically flat, even write rate while the writing fluctuated with the Samsung EVO and the SanDisk Ultra.

The entire point in purchasing the PRO Endurance was to achieve consistent writes without the inconsistent rates jumping all over the place like they do with the other two microSD cards (indicated by the jagged red lines in the graphs). This means that the PRO Endurance should offer better write performance over prolonged periods of time in devices that are write heavy. Just what I needed!

These cards were pre-formatted with exFAT, so I reformatted them to NTFS and FAT32 for my purposes. There is no bloatware or pre-installed software that autoplays in Windows. Just empty cards.

Also, the formatted capacity is less than the quoted capacity on the box, which is normal.

So far, so good! I have been using these cards in temperature-sensitive environments where writing takes priority over reading, and the cards are holding up well so far without any problems. Time will tell if they live up to their endurance claims, but I am happy so far.

This entry was posted on May 8, 2019, 12:43 AM and is filed under linux. You can follow any responses to this entry through RSS 2.0. You can leave a response, or trackback from your own site.